Skip to primary content
Skip to secondary content
It’s no secret I didn’t want to go to AWP.  In fact, when Karen Head announced to me that she had arranged it, fait accompli, that I was going to the conference, I pretty much decided to permanently take to my bed with the vapors.  My attitude wavered between considering how amputation of all my limbs or a lobotomy without anaesthesia would be preferable to flying out to Los Angeles (a city I was happy to be rid of the last time I left in 2002) and being thrust into a situation where I always have to be “on” and charming and cheerful, like a carnie, trying to tempt people to part with their cash.  (Although, of course, buying poetry is a better deal than any carnival game—and at least you don’t get snookered.)  But I’m always fine once I get to a place.  It’s the getting there, and the pre-anxiety (and the fact that I had a raging case of bronchitis—can I ever get through a Spring without it?  Geez!), that always cast a pall.

But I had a great time at AWP.  While I missed some interesting panels (being married to the booth for the entire time), I made up for it by being excellent at getting people to subscribe to the Atlanta Review.  Among the three of us—Dan Veach (now Editor Emeritus of AR), Karen (the new Editor), and me—we sold 42 or 43 subscriptions, sold out of all the journals that Dan brought with him (he brought 120 copies!), and met and encouraged lots of poets to send us their work.  I expect we’ll have quite the slush pile once Karen and I take over!  And that’s good because the more people who know about the Atlanta Review, the more we can spread our influence and get new readers and conquer the poetry world, Mwahahahah!  (Ah, sorry, I lost my head for a minute.  But you take my point.)  We want to continue Dan’s success with the journal, and between Karen and me, I think we waded into this new endeavor with aplomb.  And Collin Kelley was at the table off-and-on, and he is always one of my favorite people.

Of course, what I always forget about AWP is how much fun the Book Fair is.  Especially when the swag is so good.  And it was pretty good this year.  The hot giveaway was buttons—everyone was giving away buttons, and so my AWP lanyard was bespangled with them from all manner of journals, the London Review of Books, PoetLore, Five Points, Sierra Nevada College’s “This Sh*t Is Lit,” “Poetry Changes Everything,” and nearly two dozen more. (I was all about the buttons—and even got several compliments from random peeps about my lanyard.  The best one sported a picture of a catalope (cat with antlers)—of course I can’t remember what journal I picked that one up at—I really wanted to buy a tee shirt from them, but they were out.)  (Also, we’re totally giving away buttons next year at the AR table—we totally need to swag it up.) 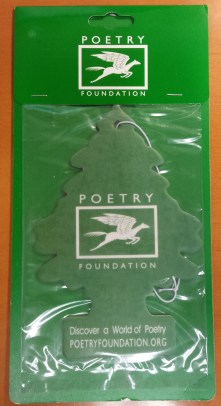 Other swag of note:  Poetry gave away car air fresheners.  I am totally mystified by this choice.  It smells vaguely piney, and also like antiseptic.  And ass.  Not really the smell your car longs for.  But on the back is the poem “Trees” by Joyce Kilmer, published in Poetry in August 1913, which is kind of nice.  Permafrost gave away a squishy stress-ball in the shape of a polar bear (awesome) as well as free copies of their journal.  There was one booth that as I was leaving the Book Fair for the day had some earbuds lying around.  I’m pretty sure they were giving them away…they had several pairs sitting on the table… but if not—if I accidentally liberated them—then I can add kleptomania to my list of skills, along with poetry and sarcasm.  (It’s good to diversify, you know.)

Then there was the booth with this one woman who apparently is a self-publishing machine. (I’m withholding her name in case my ridicule gets out of hand—but she shares a name with a famous early 20th century woman poet.)  I mean, she was probably 80, wizened like the Southwest—she looked like New Mexico—and draped in scarves and flowing skirts, and had stacks of her books in front of her like a fortress—all published through Amazon.  No matter how I tried to extricate myself from her clutches, she would not let me leave—she kept wanting me to purchase her books.

As soon as I’d inch away, she’d thrust another of her books into my hands, telling me how her life had been changed and how these poems represent her experience.  She gave me one book to take with me—which I totally thought was a catalogue describing her various books, with a few poems in between ads for her other books—and when I got back to the hotel, it turns out she was actually selling that book—there was a price of $18.95 stamped on the back.  (I was like, dafuq?  Really? Who would buy that??) Anyway, when she saw she could not entice me to purchase her whole corpus of books, she foisted her most recent one on me—which actually, from a graphic design standpoint, seems really kind of nice—the cover is lovely, and it looks like a real book of poetry, not something from a vanity press.  But I mean, how good can these poems be?  The first line of copy on the back cover states, “These new poems were all written during the first two months of 2016…” and the pub date is March 5.  I guess I am being a poetry snob.  I haven’t read the book yet—it could be wonderful.  But I’m not holding my breath.

Another book that was given to me for free was Jessie Carty’s Practicing Disaster (Kelsay Books/ Aldrich Press 2014).  I have a bit more faith in this book, although its title on the cover is written in shitty Comic Sans.  (Really?  Like who thought that was a good idea?)  The inside cover has the author’s name signed and the line “Not a joke—free poetry” with a smiley face.  And the acknowledgements list at the front of the book is quite impressive—among the places that Carty has published work include Eye Socket Journal, The Dead Mule, Blue Fifth Review, and Poet’s Market 2013.  So, I’ll try to read through it at some point.

As far as purchased books, I bought Parades by Sara Deniz Akant (OmniDawn 2014), and Hungry Moon by Henrietta Goodman (Colorado State 2013) (which kind of got banged up on the flight home—c’est la vie).  And the stack of journals I picked up is impressive—Moon City Review, New South, Southern Indiana Review, Rock and Sling, Michigan Quarterly Review, Sugar House Review (which has a beautiful cover), the Laurel Review, and several others—all of which will be seeing submissions from me in the near future—hahah.

Of course one of the things people flock to AWP for is all the famous people, as well as catching up with old friends.  I didn’t meet any famousy-famous people, though I did get to meet Kelli Russel Agodon, of Two Sylvias Press (a press that makes lovely little books), who is one of my heroes (I love her as a poet and as an editor), and who tweets great material always (follow her if you don’t:  @KelliAgodon).  So meeting her at the Two Sylvias table was so nice—I was fulsome enough in talking to her, I think she felt like she had to hug me.  But we had a nice little convo.  And I did get to see some old Nebraska alums—Liz Ahl, who I always forget how divine she is (we had drinks with her at Tom’s Urban, in L.A. Live, across from the Convention Center), and Darryl Farmer, who was here at Georgia Tech too for a little while, before moving off to the wilds of Alaska.  But overall, not as many Nebraska folks as I expected to see.  (I went over to the Prairie Schooner table, thinking there might be someone from the old days, but I didn’t know any of those people.)  I would have liked to see a few more, at least.  (I did see another UNL alum, who, as always, looked right through me, the putz.  I refuse to mention him by name, but a pox on his head.)

View from the Santa Monica Pier

Not at the conference, I met up with my old best friend/ enemy/ boyfriend-ish/ not boyfriend-ish/  “I’m gay” “No kidding” “Why didn’t you tell me?” “I thought you knew” / best friend again from back in my USC Trojan days.  We spent late Friday afternoon and Friday evening walking all over Santa Monica—we walked from Wilshire Blvd. to the Pier, and up and down the Pier, and along the beach for a long stretch (geezus, the water was cold as fuck), and then up and down the Third Street Promenade about three or four times, tried finding a movie to watch (we went to the movies all the time when I lived out there), went out to dinner, ate liquid nitrogen ice cream at Creams & Dreams, and then hung out at his place in Venice to watch Brooklyn—a great (if slow-paced slice-of-lifey movie… about 10 minutes into it, I thought, “This is so my Mom’s kind of movie”).  I didn’t get back to the hotel till well after midnight.  But it was so good to see him… and fun to tool around L.A. like we did when we were younger.

Anyway, I’m glad to be back, I won’t lie.  I need to recharge my introvert batteries which were sadly depleted while I was away.  And mostly I need to…