I’ll be the first to admit, I don’t know what a lot of writers look like.  Unlike movie and television stars, whose photos are ubiquitous, writers—even most superstar writers—don’t get their photos splashed everywhere.  I don’t watch TV, so while writers might be doing the book tours, and showing up at morning chat shows, I’ll never see them there.

Authors I would recognize if I saw them walking in the streets:  Stephen King, John Grisham, Roxane Gay, Joyce Carol Oates.  (And Emily Dickinson and Walt Whitman and Audre Lorde—but of course, they’re long dead.  And if they were walking in the streets, that would be terrifying and highly inappropriate for a corpse.)

Forget poets, I have no idea what they look like.  We live in obscurity.  The only poets whose faces I’d recognize are the poets I know personally—not an insignificant number, but not a huge one either—or the poets I follow on Twitter, though their images are about the size of a finger nail.

My point being, sometimes you bump into a famous author—whose name or work you know, but you don’t know the person, so you’re caught a little flat-footed until you see his or her name badge.  This very sitch happened at AWP this year in Washington D.C.

Working the Atlanta Review table on Friday morning (Feb. 9th), I perfected my carney act, trying to entice passers-by to get interested in the journal and maybe buy a subscription, when a handsome older man in a dapper hat, too polite to pass on by after I flagged him down, stopped.

“Do you know about Atlanta Review?” I asked in my dreadfully cheerful, most hopeful voice.

“Are you a poet?  Have you sent us some submissions?”

“Well, I have a list of 100 journals that I’m currently going down the line and sending work to.  Atlanta Review is somewhere in the middle, a great journal.  But I’m mainly a fiction writer.” (Dramatic pause.)  “I’ve written…oh, maybe 50 books.”

And that’s when I notice his name badge, peeking out from his scarf—Walter Mosely.

Oh, geez, do I feel stupid.  Of course he’s written 50 books, he’s Walter Fucking Mosely, famous for his Easy Rawlins detective novels, like Devil in a Blue Dress, which came out in 1990. 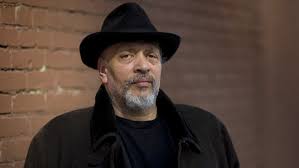 We chitchat a little longer, and then he promises that he’ll send some work our way soon, and wanders away from the table.

I’m standing there, bemused, thinking, If I had just seen his name badge, I could have been a lot more effusive in my interaction with him.  I could have sounded like a fan.  (Not to hustle him into buying a subscription, but because writers like to be appreciated for their work.) But he was absolutely charming, and didn’t seem to hold it against me that I didn’t recognize his face.  (Thank goodness.)

Of course, this is all by way of saying, we should know what authors look like—they should be in our collective consciousness, like movie actors—writers are just as important and affect people in personal, sometimes lifelong, ways.  And it’s just too bad that on some arbitrary scale of cultural significance, writers, and especially poets, fall somewhere near the bottom.

I think they should make posters of famous authors, and there should be issues of the equivalent of Tiger Beat for poets.  Wouldn’t that be cool?  If suddenly we had magazines full of poet pinups?  (I think that would be fun.)  Or if there were trading cards with bubble gum which you could collect?  Or glossy, autographed headshots?

On a last note, I realize I do live under a rock, so perhaps others are more aware of what their literary heroes and heroines look like than I am.  But I wish that as a group, we were a little better at publicity.  That fame game is hard.  (I wish I was a little better at it myself.)