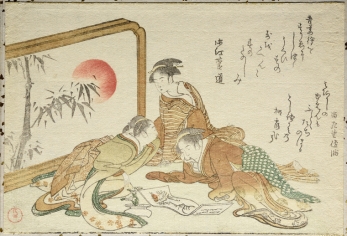 Earlier in the month, my Mom asked me if I had ever heard the expression “April is the cruellest month” and of course I had to laugh.  Any poet (or student of poetry) worth her salt recognizes that is the first line of T.S. Eliot’s The Wasteland, and it’s the first thing I think of when it turns April.

I’ve also been thinking it every day, since this is the first Poetry Month that I’ve chosen to participate in National Poetry Writing Month (NaPoWriMo).  I’ve been struggling to write a new poem every day—some days it’s been easier, and I’ve even written one or two poems that I think are pretty good.  The majority of them though are, at best, exercises in the practice of writing poetry.  Which is to say, they are poems, but not very good ones!

Still, having the discipline to write every day (or nearly every day…I missed a few days which I swear I went back and made them up!) has been illuminating.  For one thing, even if the quality of the output has not impressed me much, the habit of writing has been a kind of comfort to me.  It’s as if I can’t say I’ve forgotten how to write a poem (which sometimes I think when it’s been a while between poems), because this time I know I wrote a poem the day before.  For another thing, I’ll have 30 poems on the 30th that I can maybe go back to and work on revising.  That feels like an accomplishment.  Whether some of them are worth going back to is debatable, but the opportunity is there, should I choose to take it.

A few times I have stared at the computer and written “I have nothing I want to say.”  Then I write something down anyway, and remove that line.  It’s been liberating, especially the last few days which have been hard for me to come up with something new.  A few people on Twitter suggested I write poems about not knowing what to write, and so I sort of amended that idea to admit on the page that I didn’t have anything to say—then forced myself to write something anyway.  Again, not great art for sure, but I satisfied the NaPoWriMo requirement of a written poem.

You would think with all that’s going on right now—the continuation of Covid, the horrible and escalating war in Ukraine, the worsening climate change, I’d have a lot to write about.  But it’s hard to write good political poetry.  I can’t do it well, because such writing should be subtle so it remains art.  When I write on such things it comes out screed-like and dismal—too tell-y and not show-y enough.  It’s something I’d like to get better at though—and I suppose to get better at it, you have to practice.  And you need to read political poets.  I should do an investigation and find some contemporary political poets to read.

For the time being though, I will continue writing poems for April, just so I can say I did it. And at some point I’ll have fresh eyes to look at the work and see if some of these “exercises” are better than I remember.  Revising can be a fun part of writing, although as we all know, it’s hard work.

Anyway, all this is by way of saying April isn’t that cruel at all—at least not in my little corner of it.  I’m writing poems, looking forward to the end of the semester, and maybe even have a trip to Scotland in the offing.

And I still have plenty of copies of Amo e Canto which I’d love to sell you and donate the proceeds to the Ukraine war effort.  CashApp:  $Aishatonu or PayPal:  paypal.me/aishatonu.