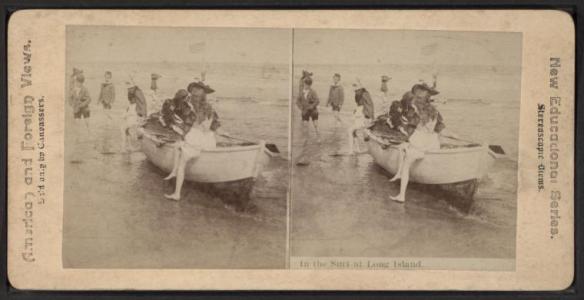 During these falling and ebbing tides, a riptide can carry a person far offshore. For example, the ebbing tide at Shinnecock Inlet in Southampton, New York, extends more than 300 metres (980 ft) offshore.

Now they tell me.

After I was swept out to sea on a rip current in Southampton, NY (yes, it was as scary as it sounds), the first thing anyone said to me at the writer’s conference (after “Oh My God!”) was “Write about it.”

I’m now two weeks past my fight with the ocean (where the ocean almost won), and I still don’t know what to say about the experience. Not really. I keep thinking I need to process it, but writers generally process things by writing about them.  Perhaps language is stronger than a nine-foot wave?

But that nine-foot wave that began my ordeal is all I can focus on.  I keep seeing it and remembering how instead of trying to swim through it, I turned around and tried to run from it, taking the full force of its power that knocked me over and began to drag me away from shore, filling my mouth and eyes with sand and salt and something viney, maybe kelp.

It’s that gray-green wave I keep seeing when I close my eyes, that creeps into my dreams and pulls me away from everything I know, making figures indistinct, small, if I can recognize them at all.  I am looking for new language to describe this feeling, but it’s as if the gray-green wave is pulling me towards every cliché you’ve ever heard about drowning—drowning in self-pity, drowning one’s sorrows, this drowning woman grasping at straws, etc.  Nothing seems real to me, but that gray-green wave.

And yet, the weird thing is, the fear and doom I feel now is all after-the-fact.  When I was in the moment, gasping for air and feeling helpless but trying to fight my way out of that current, fear and doom were not what I was thinking about.  I never thought, You’re going to die. Instead, I was angry.

Maybe that was adrenalin at work, my way of not losing my head—by focusing on my anger. Anger because misgivings about the waves had troubled me before I went in—I even wrote about them in my notebook while I watched the water.  Anger that I didn’t listen to my gut which said, Don’t do this, don’t go in, even between the safety flags. Anger for knowing how to swim well, and yet not being able to right myself and break free from the tumbling surf.  There is a kind clarity in anger, I suppose, and I was level-headed enough to quit struggling and to take the blessed hands that wound up hauling me to shore.

But now that wave haunts me, even four hours inland.  I didn’t go back to the beach after that day—I couldn’t.  I didn’t even want to see the water again—which is irrational and yet somehow petulant, as if the ocean betrayed me—who loves the ocean beyond most things (except cats, my mother, and Jesus)—when I’m the one who betrayed my own good sense to stay safe.

I am looking at Google Maps of Coopers Beach, and from overhead the beach looks like nothing special, and the crests on the waves hardly as imposing as an eyelash.  Perhaps someday I will be able to view the experience through the transformative lens of art, and write the poems that I am meant to write about it.  For now, I think I will just end this post here—without details, without a timeline, without anything beyond the memory of that nine-foot gray-green wave.