The second Hecate Applebough book (sans title, at the mo), grueling though it was to write, is completed, and I feel a sense of accomplishment about that.  It took longer to write, probably because I wasn’t on the high of NaNoWriMo, and of course, Christmas and New Year’s and the beginning of a new semester intervened, and there’s just a lot of things you have to get done at the end of the year, making writing another novel difficult.  (That sounds so pretentious right, “another novel.”  Gag me.)  I still have to tweak a couple of scenes before I will be satisfied with it as a first draft.  (Although of course no one is satisfied with first drafts, but you know what I mean.).  And I might have to seriously reconsider some other scenes which I know why I wrote them the way I did, but I don’t love them, and they need fixing.

But I knew I had to get Hecate Applebough 2 done so I could start the third one, which I’ve done in the last few days—and somehow I have a good feeling about this one.  Like I’m going to try to make it much more lighthearted, more comic.  I think that was my problem with the second one—it was like a goddamned angstfest—NOBODY was happy in the entire book.  I kept just making everyone miserable—like, it was a contest with myself:  how much can I screw with Cate’s life?  Just how twisted can I make her relationships?  Can I make some of the minor characters sad?  Yes?  Great!  And kind of what I wound up doing was making myself miserable in the process.

Don’t get me wrong, while I’m my own worst critic, and by the very nature of breathing, I assume everything I write is utter and total crap, there are “moments of possibility” in it, but the moments of pure dreck outweigh the possibilities of goodness.  I keep thinking, if I were Cate, and that was my life, I would probably swear off men forever and become a hermit.  The men in her life really are just fucked up—I wasn’t totally being funny when I joked about naming the second book Hecate Applebough and the Fucked Up Men in Her Life, because they are just such drama queens and so needy and complicated.  Honestly, I don’t know Cate stands me.  She must think I’m a total bitch to keep putting her in these stupid, angsty situations with men who don’t know what they want.

Which is why, as I said in a recent tweet, I need to let this book mellow.  Because it’s very raw, and it’s very overemotional—not like melodrama, but yeah, kind of sudsy at points.  I need that time away so I can come back to it fresh.  And maybe with some distance I can figure out what I really wanted to do with that second book and see if I can’t get it more there than it is right now.  (Of course, it will need substantial revision—I just want it to be a good first draft that will make revision be something hard but worthwhile instead of painful just to get to ok-ish-ness.)

And writing the third one will help me a lot because I am determined to make it fun.  Cate needs a break from constantly having her life explode in her face—and I need a break from that too.  I suppose, all fiction authors are either consciously or unconsciously trying to work out the crap of their own lives, and it manifests in the lives of their characters.  I know that I’m working through some issues—that sort of became obvious in the second book, because Cate is always thwarted, she always thinks things are settling down and then, hello, some tragedy or another happens and she’s back down in the sewer trying to dig her way out.  And that’s kind of how I feel my life is.  Of course, I don’t have two hot guys vying for my affections, so I can’t relate to her on that level (alas and alack—that might be a fun problem to have!), but that’s just a mask for the angsty things going on my life, I think. (So personal life spoiler alert:  I have problems and bad things are happening.  And who suffers?  Cate.)

Anyway, not to give away too much about the plot, but the third book already is starting with the comic premise that Cate, Val, and Lonny are all going to visit her Dad in Nebraska for Spring Break.  Book 3 starts on the airplane and I had a good time writing Val and Lonny sniping at each other and Cate just rolling her eyes, and now they’re in Nebraska and she’s dealing with her stepmother and her infant brother, and the change of scenery, away from Sunderson Academy and the Study Salon, is doing me a lot of good.  I’m really hoping that I can sustain the humor because Cate deserves a little happiness after what I’ve put her through.  But on the other hand, it wouldn’t be Cate’s life if it were charmed.  So I have to figure out how much I can torture her and still keep the majority of the book breezy.

In other news, I admit that I’m still vacillating back and forth whether to share Book 1 with Brilliant Fiction Writing Friend.  He’s super persuasive, with his metaphorical chisel that chips away at my protests (plus his company is awesome).  My insecurity, however, is equally persuasive—pugnacious, even (which means it usually wins out when I have these “what if” wars in my head).  But he said something to me the other day that—guilted isn’t the right word—tipped the balance in his favor a little more, let’s say—something about making editing a part of his professional development, and that my book would help him work on those skills.  And frankly, when he pitches it like that, and I can see letting him read HA1 not as an opportunity to deprive him of time he could be writing, were he so inclined, but as opportunity for him to grow in a way he’s interested in growing, well, how can I turn that down?  That would just be mean of me.  And of course, if he didn’t have my book to read, he has other people whom he could help, so it’s not like he’ll languish if I said no (and really meant it).  So, why not let him help me, right?  But…blah blah blah.  Shut up, JC. (Can’t you for once just accept good fortune?)  (Not easily.) (OMG OMG OMG, I realize, I write this blog the same way Cate writes her diary—I’m such a headcase.) (Please send help.)

Anyway, apropos of nothing, please enjoy a picture of sleepy TimToms, who has been keeping me company today as I’ve been writing. 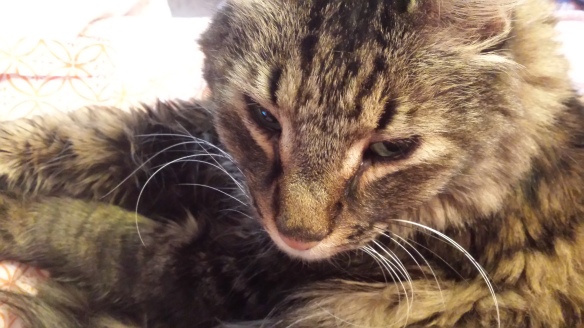 1 thought on “Writing and Dithering”