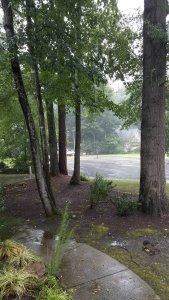 It’s so rare to be enjoying a thunderstorm here in my part of Georgia (Marietta)—usually it rains for 10 minutes and then stops, and the humidity jacks up to 600%.  (To be fair, once this storm is over, the humidity will probably reach 600%, but that’s neither here nor there.)  The point is, I’m not being disturbed by neighbors working on their yards and stirring up a racket with power tools.  It’s tapering off a little now, but I don’t mind, as long as the sun doesn’t try to hack its arrogant way through the gray sky.  (Which is so rude!)

Writing, sometimes, is like a storm, and sometimes like a drizzle (not to be all binary in my thinking, but…).  Since I’ve returned home from Rockvale, it’s been bone dry.  I don’t say this with a “waaaahh, feel sorry for me” warble in my voice.  I have put the time to good use—supporting my writing by researching venues and submitting work to a number of places I’ve never heard of before but that look interesting.  I’ve also been working on a couple of applications for future residencies, which would be wonderful if at least one panned out. As I was telling myself the other day, publishing is a numbers game—you just gotta keep sending out work to places and hope it hits.

It takes stamina though to submit work.  I know several writers who only submit a few times a year, and then I know a guy on Twitter who bragged about having 266 active submissions in his Submittable queue.  (Not gonna lie, that’s definitely something worth bragging about.)  The highest number of active submissions in my queue ever was probably 75, but I was kind of a submitting machine in 2019, and since then I manage around 30-35.  Of course, logic says, if I believe publishing is a numbers game, I should be submitting more, and I do think that for sure, but I also know that you can’t do everything.  As much as I’d like to have 75 subs in the queue, I will be happy if I maintain a goal of 30-35, replenishing as needed as the rejections (and hopefully acceptances!) roll in.  I can do a lot of submitting over the next four months…you know, assuming those pesky job responsibilities don’t impede me too much.  😊

Recently, I’ve been assisting a new-to-poetry writer.  She found me on Poets & Writers, and just cold-emailed me about helping her develop poems, talk about craft, and work on process and revision options.  It’s been so much fun.  We’ve been meeting via Zoom, and I’ve kind of based my work with her on the creative writing tutorials I’ve run for graduate students at Georgia Tech.  The difference is, she’s older, she has earned an MFA in fiction (so she’s not new to creative writing or the heavy-duty commitment it entails), and she seems really invested in poetry.  (She took poetry up during Covid; she said that coming up with long-form fiction was too difficult with the world so askew, and so she decided to try poetry instead.)  We’ve only been working together since the end of June, and I don’t know if this is a short-term gig or long-term project, but I’m really enjoying it. I bet all writers could use a coach at some point.  I’m sure I could have any number of times.  Hopefully, she’s finding our sessions productive, and the comments I make on her poems to be useful.  It’s definitely been useful to me…now, if I could just remember some of the “nuggets of wisdom” for myself that I’ve passed on to her!

In other—but somewhat related—writing news (related by coaching, that is), I recently became one of the inaugural members of the Georgia Tech Faculty Writing Fellows, a program through GT’s Office of Professional Development.  This honor comes with coaching sessions, writing retreats, and writing exchanges.  It will be a lot of work, but I’m really looking forward to the opportunity.  Of course, most of the writers in the program are tenure-track researchers—I’m probably the only creative writer—but hey, extra eyes on work are always a good thing.  And while I work on this next book I can use all the eyes I can get.  Plus, it’s nice to have a fellowship on the old CV, you know?  Even if it’s just something through work.

Ah well, the sky is getting lighter and I see sun reflections off cars and the cul-de-sac puddles.  And now a blaze of sun.  The storm was lovely while it lasted.

I hear a mourning dove somewhere outside cooing.  I think she liked the rain too.