Our lonely booth, with Collin Kelley and Karen Head

This year marks the 25th anniversary of the Atlanta Review, and so we were thrilled to be in Portland to help celebrate this milestone with everyone and debut our 25th Anniversary Anthology.  Not only was Atlanta Review one of AWP’s sponsors this year, but Karen Head, our fearless Ed., had gotten us a primo spot at the entrance of the Book Fair, and we expected to blow through our swag.  Additionally we had a great 25th anniversary reading lined up with Ilya Kaminsky, Sholeh Wolpe, Marty Lammon, and former editor, Dan Veach, which we knew would be packed to the gills. We were expecting to take Portland by storm.  Reality was a little less impressive.

If you want to skip the details, suffice it to say that I’m glad I went, and that I love spending five days surrounded by writers and books in a city I’ve never been to.  If you want the low-down, read on…

Part of the problem was AWP itself.  I don’t know who’s on their planning committee, but clearly they had been smoking some of Portland’s finest cannabis long before everyone else actually got to town because everything was really effed up.  For example:  Wednesday was exhibitor’s move-in, and instead of having the 4/5 of the computer kiosks set aside for exhibitors, they had one kiosk dedicated to exhibitors, and four for just regular registrants. The line was interminable for exhibitors, while meanwhile, regular folks breezed through—and we (the exhibitors) needed to get into the Book Fair to set up.  Then the sole printer for the exhibitor’s kiosk went down.  So we all just stood there in line, well over an hour, waiting for tech support to show up.  It seems to me they should have grabbed a printer off one of the other kiosks and used that one, but no.  (I did get to see Alicia Ostriker who walked by, so hey, there’s that.)

When we got into the Book Fair, we discovered a) our double booth was a single booth, because AWP had given half our booth to Travel Portland, and b) there was no Information Booth anywhere to ask anyone about it.  So I had to go a-wandering, asking random people if they knew whom I could contact, and someone told me to look for a person with an orange lanyard so that I could explain the sitch.  I found a lady wearing the mythic orange lanyard and fairly flew down the stairs from where I had stalked out a position from the level above. She took my cell number and said someone would come and talk with us.

An AWP volunteer arrived (after a while) and after Karen explained the situation, Travel Portland got the boot, and suddenly we had our double booth.  But forget about being at the entrance of the fair—the doors we were by were closed due to construction, and that meant we missed out on a huge amount of foot traffic.  In fact, the little booths that are usually in the back of the Book Fair and don’t get much traffic were by the defacto entrance to the Book Fair, and there was no room at all to walk when I passed through to check things out.  Which of course was great for them—and bad for us.

Our reading was great, and while it wasn’t unattended, it was in no way packed to the gills.  Why?  Because it was 10:30 a.m. on Thursday—when registration was in in full crisis.  You couldn’t believe the lines—it was the proverbial sea of bodies.  People were waiting over two hours in a serpentine line, and because the rule had been people can’t attend any of the panels without their badges, people missed the early panels, like ours.  No one seemed to know why the lines were so long, except that AWP had “record” attendance, and no planning.  The line was so terrible it even started a hashtag on Twitter, #AWPline.

In many ways, it was kind of a disappointing AWP over all.  Not only was it extremely expensive to attend (my airfare alone was nearly $900—for coach, and let’s not even talk about the hotel and ground transportation), we really lost out on the  kind of exposure we were hoping for in return for our sponsorship—we lost out big time on sales. We should have been inundated with visitors, being on the “boulevard,” but mostly people passed us on their way to get to the snack bar.  I mean, we only brought 30 copies of our 25th Anniversary Anthology, and I would have bet money we’d have sold out of those on the first day.  But when the conference was over on Saturday afternoon, we still had 10 copies. And we didn’t sell near the subscriptions I was hoping we would.  I’m sure Karen, with her negotiating wiles, will somehow get us a deal next year on San Antonio, but I know she’s annoyed with how things turned out.

No displaced folks out this early on a Saturday morning

Also, if you’ve never been there, downtown Portland is a depressing-ass area to walk around in.  The amount of displaced/ transient people (“homeless” is such a pejorative word, and I’m trying to get away from using it) living on the streets in tents or in doorways is absolutely heart-wrenching.  One Lyft driver told us that Portland has a lenient stance towards this population—which, I suppose on one hand is good, because they are allowed to hole up anywhere—but there are so many of them and you wonder how it is that Portland can’t come up with a plan to find these people stable living environments. How do they think it’s ok to allow people to live on the street?  Certainly none of these people bothered us at all as we walked by, but my heart was breaking for all of them. Another Lyft driver (the one who is raising $500,000 to open an orphanage in Russia) blames the opioid crisis and gentrification, and the fact that so many of these people were rounded up in California and given a bus ticket up north.  It just seems to me that a place as supposedly progressive as Portland should be able to find a good, humane solution for these people.  Of course, the real problem is late-stage capitalism, but I’ll spare you the screed about that.

Book Fair issues aside, I personally was happy I got to connect with some people I know on Twitter (like flash writers Tommy Dean and Kathryn McMahon), and catch up with some folks I met last year from the Southampton Writers’ Conference, as well as to have time to hang out with Grace Bauer (my thesis advisor from Nebraska) and Collin Kelley (who, yes, lives here in Atlanta but I don’t see him that often—also he’s promoting his new book, Midnight in a Perfect World…if you don’t have it, get it).  And I got to meet Kim Davis, my publisher (how those two words sound wonderful together!) over at the Madville Publishing table, and not only was she both open and friendly, but I really had a good feeling about her.  Like she’s really behind What Magick May Not Alter and will do a good job with promoting it.  And I got to chitchat with her daughter Jacqui, who designed the book cover.  More than anything, meeting Kim and Jacqui assured me that my book has found the right home. 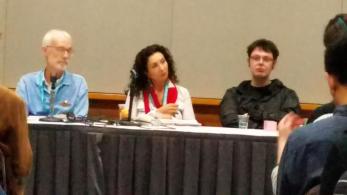 Also, while we didn’t have as many butts-in-seats in our reading as we hoped, it was a great reading (and several people did come by to tell us they enjoyed it, so that’s good).  The poems that the readers chose to read (both their own and a few from AR’s past) were vibrant and meaningful.  And I had never heard Sholeh Wolpe (the guest editor of our Iran issue) or Marty Lammon read before, and I really enjoyed Sholeh Wolpe’s work—even the new poem she read to us, which she couldn’t finish because she mislaid the other page.  And Ilya’s reading was wonderful—he read poems from Deaf Republic, and the more I hear him read, the more I appreciate his delivery.  Something about that Russian way of reading really engages you on a sonic/ gut level.  This reminds me—I was listening to the Poetry off the Shelf podcast episode “The Populist Soviet Poet” yesterday, on my way to a doubles match with Peggy, and while they were discussing Vladimir Mayakovsky (a Russian poet and playwright of the 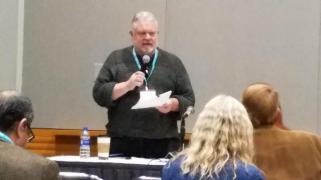 early 20th Century), when they shared bits of him reading his work, he used the same kind of intonation that Ilya does when he reads.  So it just must be the Russian way of reading, and it’s dynamic and impels you to engage with the writing on a whole different level.  Honestly, it’s the kind of thing I’d like to study, that kind of delivery—it brings gravitas and power to poetry, and I could stand to develop some of that in my own performance.  So, I’m thinking I need to be checking out Russian poets on Youtube.

Finally, I really liked their tram system, and the fact that the convention center was across the Willamette River so we had to go over it every day.  I could look at the river every day, I think, and not get bored.  Also, I got to see Mt. Hood (from a distance), and I wished I had had the time to visit. It was beautiful to see this snow-capped mountain after being stuck in such an urban setting.

Even a bad AWP is a good one. Where else can you be surrounded by 15,000 writers and people who really just get you?  All the same, I’m glad it’s over…it’s exhausting to maintain even five days’ worth of extroversion.  I’ll have to shore myself up for next year in San Antonio.

(P.S.  Sorry the pictures from the reading aren’t better…I came in late because I was shmoozing at the booth, and had to sit in the back.)